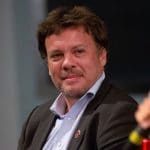 Jean-Pierre has worked within the International Red Cross Red Crescent Movement since 1991.  He has led emergency response operations at the provincial and national levels, as well as in nearly forty countries.

Jean-Pierre is considered an expert in crisis management, especially effective during disasters and emergencies, and usually deploys to lead the initial response to sudden onset events. His energy, optimism and solution-oriented approach help him to distill complex situations into manageable components. He can quickly evaluate competing priorities, identify the most urgent and important actions required, and take calculated risks, when necessary. His ability to make decisions based on often limited information, and the need to adjust as situations evolve, has enabled him to be an effective leader in challenging circumstances.

His international leadership experience has included the Red Cross Movement’s response to the South Asian tsunami, the Haiti earthquake, the influx of Syrian refugees into Jordan, the food security crisis in the Sahel and the Ebola outbreaks in Sierra Leone and Guinea. In Canada, Jean-Pierre has led Red Cross field operations during the Fort McMurray wildfire evacuation, the asylum seekers arrival in Lacolle and the BC wildfires of 2017.

Jean-Pierre is currently based in Ottawa where he serves as a coach for leadership development. He holds a Bachelor of Arts in Political Science and a Master of Arts from the Université Laval in Québec. He is also a certified executive coach from Royal Roads University.