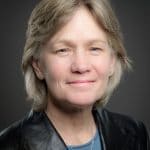 From Firefighter to Deputy Minister of Emergency Management for BC, Becky’s experience from the local community to high levels of government provides valuable expertise in emergency planning and response.

Prior to joining the BC Public Service, Becky was Fire Chief of the Cobb County Fire and Emergency Services department in the metropolitan Atlanta, Georgia area. She served on numerous committees, boards, and councils during her tenure as chief, including the Georgia Homeland Security Task Force, the Executive Session on Domestic Preparedness at Harvard’s Kennedy School of Government, the National Infrastructure Advisory Council to which she was appointed by President G.W. Bush, and the Board of Directors of the National Fire Protection Association.

Becky holds degrees from Thomas Edison State University, has completed the Harvard Senior Executives in State and Local Government Fellowship Program, enjoys Chief Fire Officer Designation from the Institute for Public Safety Excellence and is a Member of the Institute of Fire Engineers.